Carbon leakage is defined as an increase of emissions outside the EU because of EU climate policies. As such policies affect the costs of economic activity, especially in energy intensive industries, they might cause companies to move production to countries with laxer greenhouse gas emission policies. Therefore, affected industries receive benefits, such as more free emission allowances in the EU Emissions Trading Scheme than other sectors.

The Kyoto Protocol requires industrialised countries, often referred to as Annex I countries, to limit their greenhouse gas (GHG) emissions. To this end, several policies have emerged inside the European Union (EU), such as the EU-Emission Trading Scheme1 (ETS), composing its overall climate policy2. Carbon leakage is a term used to describe the transfer of industrial production to countries with laxer constraints on GHG emissions, due to additional costs resulting from emission abatement activities. Carbon leakage can lead to an increase of global emissions, therefore undermining the Kyoto Protocol objective of reducing GHG emissions3.

The extent and the probability of carbon leakage under the EU ETS has been a research object of both theoretical and empirical approaches. Although no factual evidence for carbon leakage has been found for the past two ETS periods (2005-2007 and 2008-2012)4, the theoretical literature tends to predict significant leakage rates5.

1.2. Cause & Effect of carbon leakage

Carbon prices can result directly from a cap-and-trade system, such as the ETS, or from a tax or indirectly from other policies and measures that produce an indirect carbon price through their mitigation impact, intended to address climate change. In that case, some businesses consider this latter dimension as a proxy price for carbon for internal decision making.

The actual carbon cost for a sector or business can also be either direct or indirect. Direct costs are translated in the costs of procurement of instruments in order to comply with emissions constraints. Indirect costs are increased electricity production costs emerging from ETS compliance costs for electric utilities which are passed through to industrial consumers. As a result, the latter have to "face an extra cost because of the cost of CO2 embedded in electricity prices"3.

Carbon prices emerge as a result of the constraint, while carbon cost is the actual amount of money that, for example, an industry would have to pay in order to meet an obligation; it only applies to those who have to meet carbon constraints.

Carbon leakage can occur via either one of the following paths6.

In the EU-ETS context, carbon leakage is defined as an increase in emissions outside the EU as a result of the policy to cap emissions within the region7. It is computed by the ratio of emissions increase outside the EU over the corresponding reductions in the EU, considering the bidirectional tendency as a consequence of the EU-ETS7.

According to Article 10a(15) of the ETS Directive, a sector or sub-sector is "deemed to be exposed to a significant risk of carbon leakage if:

A sector or subsector "is also deemed to be exposed to a significant risk of carbon leakage if: 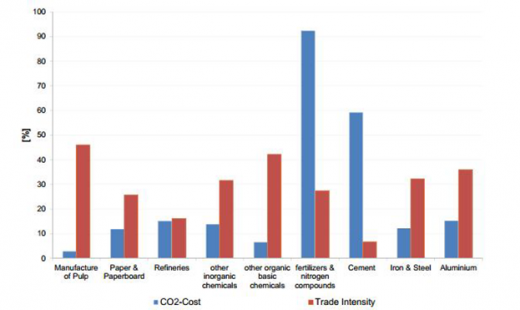 The sectors and sub-sectors which fill the aforementioned criteria "figure in an official list established by the European Commission after agreement by the Member States and the European Parliament ... and following extensive consultation with stakeholders."8 This list is valid for five years and includes both indirect and direct costs. "Amendments are allowed for by the Directive following completion of quantitative and qualitative assessments of further sectors and sub-sectors according to the criteria referred to in Article 10a of the revised ETS Directive."8 The Commission is required to draw up a new list every five years. It already determined a second list in October 20149, that will enter in force in 2015 and apply until 2019.

According to the Directive, industrial sectors that face significant risk of carbon leakage will receive free allowance allocation up to 100% of the relevant product-specific benchmark until 2020. The benchmarks are defined starting from the average 10% of the most efficient installations, in terms of greenhouse gases, taking into account the techniques used, substitutes and alternative production processes10. The rest of the installations will receive an allowance allocation that may amount to 80% of the relevant benchmark in 2013, but will fall to 30% in 202011.

Putting a price on carbon emissions forms a way of creating incentives for the phasing out of polluting technologies and promoting a shift to low carbon alternatives12. Industries are being motivated to transform their technology and improve their production process in order to reduce emissions and comply with regulations. Carbon leakage prevention measures thus aim to facilitate such "innovation and provide sufficient incentives for research in breakthrough technologies", which is necessary for the achievement of radical changes in energy use and CO2 emissions in the industrial sector12.

According to the Organisation for Economic Co-operation and Development (OECD)13 innovation activity in low-carbon technologies presented a dramatic growth rate during the period following the Kyoto Protocol agreement in 1997, as indicated in the following figure. Clear policy signals "demonstrating commitment by the [EU] community are critical for business investment decisions in [research and development (R&D)] for low-carbon technologies and infrastructure"14.

Strong increase in patents for wind and solar power
Innovation in Environmental Technologies, Compared to All Sectors

As underlined during the Second Stakeholder Meeting on Carbon Leakage post-2020 in July 2014 in Brussels12, regarding innovation and demonstration of low carbon technology, public funds and practical support will be essential in the transition to a low carbon economy. Several initiatives were presented as ways of supporting new technology, such as the Swedish Program for Energy Efficiency, aiming to increase energy efficiency in energy intensive industries or InnovFin, a series of financing tools and advisory services to support investments on research and innovation provided by the European Investment Bank (EIB)15. Sectoral low carbon 2050 Roadmaps and concrete projects (e.g. HISarna, an innovative way to produce steel) were also presented at the meeting for the same purpose. It was noted that details of a future innovation support still need further reflection. The continuation of the "NER 300", a large scale funding programme for carbon capture and storage demonstration projects and innovative renewable energy technologies was suggested in this context, as well as its expansion to support industry innovation. It was stated that innovation must be considered as part of a broader discussion on competitiveness16.

Carbon leakage and the carbon leakage list are of major importance to the EU, given the debate over issues of carbon pricing and climate change. These issues mainly concern the appliance of "Back-loading" within the EU-ETS framework and its structural reform, as well as a mandated review of the carbon leakage list. Through back-loading, "a number of auctioned allowances will be withheld from entering the market at present and brought back to the market during 2018-2020"17, thus temporarily impacting on an increase of the CO2 price. The 2030 Energy and Climate Framework on which EU leaders decided on October 23rd, 2014 and a potential upcoming international climate agreement in 2015 under the United Nations Framework Convention on Climate Change (UNFCCC) also constitute significant developments affecting carbon leakage options.

2.2 No evidence of carbon leakage

Within the framework of planning for Phase 4 of the EU-ETS, the Commission has launched a public consultation to gather diverse opinions with regard to different available options for a system to avoid carbon leakage after 2020. The main focus of the consultation concerned the definition of the amount of allowances that should be dedicated to addressing the risk of carbon leakage post-2020. The roles that free allocation and support for industrial innovation should play were also topics of interest. Based on a questionnaire, the consultation was completed in July 2014 and complemented three stakeholder meetings were held on June 13, July 10 and  September 25, 20148.  At the end of the last stakeholder meeting, Ms Tovšak Pleterski, Director in DG Climate Action, concluded, among others that, while there has been no evidence of carbon leakage so far, the future system must ensure the necessary protection. It was summarized that a strong industrial base is needed in Europe and that views converge towards the need to incentivise innovation18.