There is quite a vast landscape of different definitions used for the word 'cost' related to the concepts of climate change. To enhance appropriate application and interpretation, this knowledge package explains the various terms in the climate change debate. Furthermore, it provides cost estimates for mitigation expressed in consumption losses for 2020 through 2100 and argues that costs would further increase if climate mitigation was postponed.

Is it the social cost of carbon, the private costs, the carbon price or a reduction in the gross domestic product (GDP) we need to consider when talking about the costs of mitigation? The truth is that all of these terms would be legitimate, but one must be aware of the different definitions in order to use them in the right context. The next three sections explain the composition of the most commonly used terminology to define costs and its appropriate context. (Further remarks on climate finance can be found in Knowledge Package: Climate Finance for Reduction of Emissions and Vulnerability)

"Private and social cost" concepts distinguish between costs that accrue to individual decision-makers (including both private companies and households) and the society. Private cost assessments are influenced by the costs of input to a production process, labour and land costs, financial interest rates, equipment costs, fuel costs, consumer prices etc. The value of externalities, such as emissions, however, is not considered by the individuals responsible for it, but only in the social perspective1.

The "social cost of carbon" (SCC) –measured in monetary units– refers to the present value of costs that incur with ongoing climate change in the sense of marginal damage caused by an additional tonne of carbon dioxide (CO2) emissions. It can therefore also be linked to the "costs of inaction". The SCC is used to compare the damage caused by climate change to the costs of emission reductions and is consequently a crucial concept for cost-benefit analyses. The estimates of the SCC vary substantially since the assessment essentially depends on the assumptions made regarding time horizon, discount rate and the baseline emission scenario2.

The "carbon price", on the contrary, charges the emission of one unit (that is usually tonne) of CO2. This concept is implemented in carbon taxes or cap and trade systems to limit CO2 emissions to the economically optimal (efficient) amount. In reality though, the European Emissions Trading Scheme (EU ETS) was subject to criticisms for its unsuitability (more on that can be found in the Knowledge packages: The European Climate Policy Mix and Interactions between Climate Policies: Examples from Europe).

"Mitigation costs" can be measured at various levels: project, technology, sector or macroeconomic level1. An analysis at the project level provides costs of the implementation of specific technical facilities, infrastructure, demand-side regulations, information efforts or technical standards, and is assumed not to have significant indirect economic impacts on markets and prices1. At the technology level, a particular greenhouse gas (GHG) mitigation technology is investigated, typically with applications in various projects and sectors. At the sector level, a partial-equilibrium analysis is performed to study sectoral policies, such as economic instruments related to prices, taxes, trade, and financing, specific large-scale investment projects, and demand-side regulation efforts. The most comprehensive analysis focusses on the macroeconomic level considering impacts of policies across all sectors and markets1.

For convenient comparison of results of different studies and approaches or different time scales, most analyses report mitigation costs in macroeconomic indicators, such as "GDP losses" or "consumption losses". In general, estimates are stated as deviations from a counter-factual baseline scenario without mitigation policies. Intuitively explained, the measure expresses how much of GDP or total consumption is "lost" in percentage terms at a particular point in time compared to its expected value for this particular point in time by reducing emissions to a certain stabilization scenario3. Another way to report losses in macroeconomic values would be the assessment of "reductions in growth rates", such as consumption growth or GDP growth.

Mitigation includes a range of changes, such as behavioural changes and the switchover to alternative technologies. Estimates of aggregate economic costs considering these changes stem from different integrated models based on different assumptions. For these reasons a substantial variation of estimates emerges. In its Fifth Assessment Report the IPCC performed a comprehensive study on mitigation costs3. Figure 1 presents the results for general-equilibrium models showing that both consumption and GDP losses increase with a more stringent concentration goal (indicated by different colours). 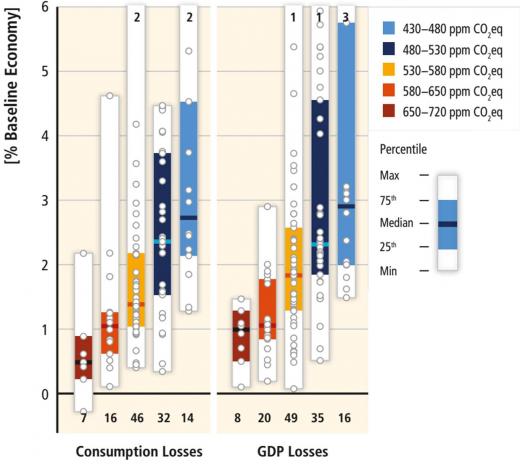 Another robust result across studies is that costs tend to increase not only with the stringency of climate targets, but also over time (see Fig.2)3. For reaching the climate target of 430-480 ppm CO2eq by 2100, global consumption losses relative to consumption in the baseline are foreseen to be between:

In different terms, this relates to an annual average reduction in consumption growth of: 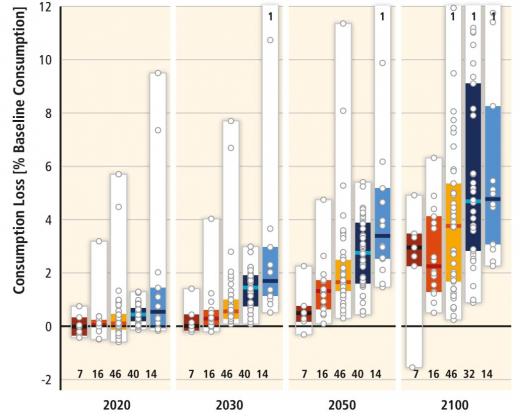 Important factors that cannot always be accounted for in integrated models or that are accounted for in different ways are the availability, cost and performance of technologies. Since technology is a major pillar of the transition to a low-carbon economy, variation in these factors might lead to an even greater spread of cost estimates. Additionally, mitigation costs will not be identical across countries. Costs will regionally diverge based on international participation in mitigation, regional mitigation potentials, and transfer payments across regions3.

3. The costs of delayed mitigation action

This article has shown how much mitigation is likely to cost if we start to reduce emissions now. However, what if mitigation policies – or global agreements– were to be postponed to say 2020 or even 2030? There are two possibilities of how postponing a global agreement could look like: either mitigation actions planned today are delayed until a future date, possibly missing current climate targets, or mitigation policies are still supposed to meet the current target but are initiated at a later date4.

In the first scenario, CO2 emissions accumulate in the air and their concentration increases in the atmosphere, which in turn leads to persistent higher economic damages. This scenario also includes a variable where more aggressive climate targets become infeasible to achieve due to a narrowing down of available options 5. (For more info look into Knowledge Package: Mitigation: Co-Benefits and Interlinkages to Adaptation for more information on mitigation options.) Costs in this scenario may be reduced in the short run, but increased in the long run.  This is true also for the latter scenario, where policies to reduce emissions must be adjusted to the new starting point with already increased GHG concentrations in the atmosphere and a shorter time period for policies to become effective. Hence, this requires policies to be more stringent and thus more costly in subsequent years3, 4.

Several studies confirm that a delay is costly in multiple ways3,4,6,7:

Jakob et al.7 compare results of three different climate-energy-economy models and find that for stabilising atmospheric GHG concentrations at 450 ppm CO2, postponing a global agreement to 2020 raises mitigation costs by at least 50% on a global scale, whereas a delay to 2030 causes ambitious climate targets to fall beyond the set of possible stabilisation levels.

If a delay resulted in warming of e.g. 3° Celsius above preindustrial levels, instead of 2°, the CEA4 argues that annual economic damages would make up about 0.9 percent of global output. The marginal costs of one additional degree of warming are supposed to be even larger (see Fig. 3). 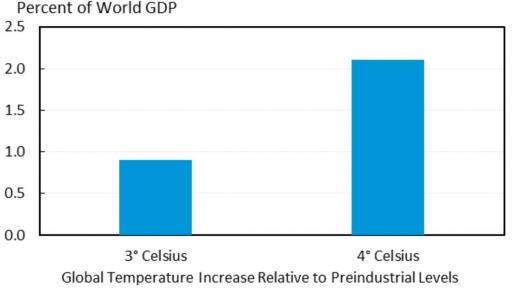 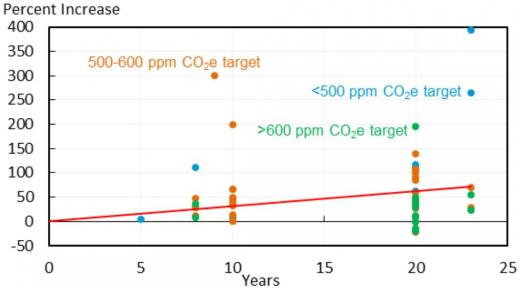 Figure 4: Notes: Data points are percentage increase in mitigation costs from delay and the associated length of delay for a given paired simulation. The scatterplot presents a total of 58 paired delay simulations. The solid line is the regression that fits to these data, restricted to pass through the origin.
Source: CEA (Council of economic advisers), “The cost of delaying action to stem Climate Change”, CEA report ([USA], 2014). Online available at: https://www.whitehouse.gov/sites/default/files/docs/the_cost_of_delaying...

When considering the size of today’s mitigation costs and comparing these to what mitigation would cost in case of postponing action to the future, it seems reasonable to invest in climate change mitigation right away. The lower the stabilization level and the longer the delay, the higher are the additional costs of mitigation and the more difficult, or even infeasible, it will become  to keep global warming low. Therefore and for the reason of persistent economic damages, mitigation action should happen urgently.