Policies to address climate change mitigation that have been deployed in parallel may interact with each other, with positive or negative effects for emission reductions and for cost-effectiveness. This Knowledge Package presents examples from European Union climate policy, renewable energy policy and energy efficiency policy.

1. Does diversity in the European climate policy landscape make it inefficient?

European Union (EU) climate policy up to the year 2020 focuses on three main policy objectives: the greenhouse gas (GHG) 20% emission reduction target, the 20% energy efficiency target and the 20% renewable energy target. To meet each of these targets, EU wide policies and measures have been put in place. In some cases, such as the EU Emissions Trading System (ETS), these policies have been widely harmonised across the EU. In other cases, Member States (MS) have been able to choose and design related policies on their own, such as feed-in tariffs for renewable energy and net metering in Germany, or renewable portfolio standards in the United Kingdom (UK). Also subnational jurisdictions introduce relevant policies, such as building codes or subsidies for efficient buildings.

All these different policies interact and may reinforce each other, but they may also lead to inefficiencies. For example, CO2 emissions from electricity, heat and industry are addressed by the EU ETS, but also by policies supporting renewable energy deployment and measures to enhance energy efficiency.1  What has been learned so far about such policy interactions in implementation across Europe?

The targets and instruments established for the three core EU climate policy areas – addressing GHG emissions, increasing renewable energy use, and improving energy efficiency – interact with each other in a significant way. In a forecast for the third phase of the EU ETS (which is in essence a policy target turned instrument), the Deutsche Bank estimated that if the 20% renewable energy and the 20% energy efficiency targets were met, they would generate more than 2 gigatonnes of emission reductions up to 2020. This amount would be enough to meet the ETS’s emissions cap without any additional mitigation action by the participating firms.2

In a similar analysis, the European Commission found out that with current policies, the energy efficiency target would not be met by 2020. However, if the policy effort is stepped up so that the energy efficiency and the renewables targets are both met, the EU would manage to achieve a 25% reduction in GHG emissions by 2020. This conclusion supports the findings by the Deutsche Bank: if all three core objectives are met, the EU will outperform in at least one of them. The Commission therefore proposed in conclusion that if energy efficiency policies are reinforced, EU ETS allowances may need to be set aside. This would avoid undermining the trading system and ensure that emission reductions are achieved cost-effectively throughout the economy.3

Following up from these findings, a modelling study incorporating the effects of the financial crisis concluded that achieving the energy efficiency and renewable energy targets would result in GHG emission reductions of about 30% by 2020, as compared to 1990, excluding the effects of aviation and of the land use sector.4 The authors thus suggest that the EU ETS cap should be tightened so that the three policy instruments are balanced.

One of the main barriers that hinders the adoption of energy efficient technologies is imperfect (costly, insufficient or inaccurate) information regarding the energy performance or the costs and benefits of different technologies. Consumers and firms thus take sub-optimal decisions and under-invest in energy efficiency.5

Another important barrier relates to principal-agent problems. A typical example is the situation that arises between a landlord and a tenant: they both have conflicting goals. The tenant is probably more interested in energy efficiency because it leads to savings in energy costs. The landlord however does not invest in energy efficiency as efficient technologies are more costly and would lead to additional construction costs.
An IEA study has found that about 30% of residential energy use is affected by similar principal-agent problems.6 The study estimated that in just eight commercial, residential and end-use sectors in 5 Organisation for Economic Co-operation and Development (OECD) countries as much energy use is affected by principal agent problems as 85% of the total energy use of Spain in 2005.

3.2. Consumers do not adjust electricity consumption with higher prices

Carbon prices have been pointed out to have some limitations regarding their effectiveness to address barriers to energy efficiency. One of the reasons is the low price elasticity of electricity: even if electricity prices rise, consumers do not change their behaviour significantly in response. A related reason is that electricity spending represents a low share of the household budget. In addition, consumers spend little time in getting information about efficiency of an appliance when they buy it, and sometimes they do not even have the possibility to do so.7

From a review of the existing literature, Ryan et al. conclude that "MEPS and labelling can address market failures not addressed by carbon pricing in a cost efficient manner".9 Through a qualitative analysis of the barriers that each of these policy instruments corrects they also show that MEPS and information provision are complementary to carbon prices and do not overlap with them significantly.

Moreover, they find that these specific policies can be more effective in combination with a carbon price. On the one hand, the carbon price may motivate consumers to actively use the information tools to look for more efficient appliances (awareness raising). On the other, the carbon price may to a certain effect reduce the rebound effect, this is, the fact that after saving on energy costs through energy efficiency, consumers may spend these savings in other energy-intensive activities or in longer use of the previous ones, countering the gains achieved.

3.5. Carbon pricing does not reduce the need for performance standards or labelling

In summary, Ryan et al. conclude that carbon pricing does not reduce the need for performance standards and/or labelling to improve energy efficiency of appliance use at least cost. On the contrary, both types of policies may reinforce each other positively.

The study performs a similar analysis for policies supporting the adoption of more efficient space and water heating equipment, including building standards, labelling and information programmes, subsidies and tax rebates and contractual arrangements for new constructions. The findings for this subsector reinforce the ones described above: a carbon price does not seem to be sufficient to reduce energy consumption and stimulate more investment in energy efficiency. Policies that address behavioural and market barriers are necessary, in the sense that they are complementary to the carbon price and reinforce its signal.10 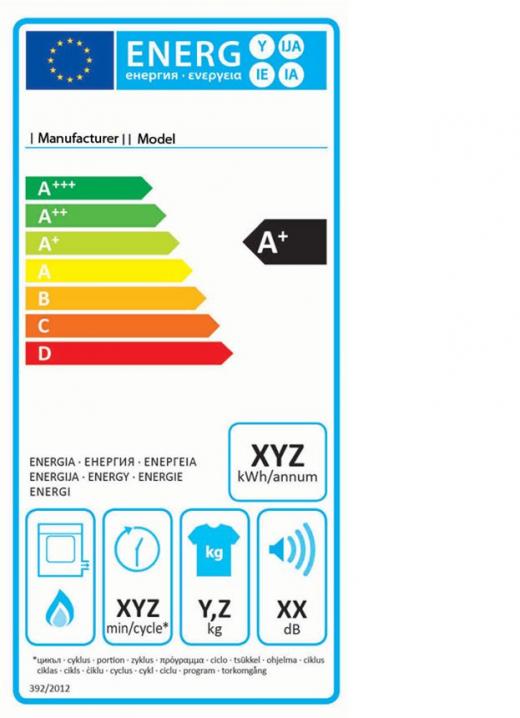 Within the EU, specific policies aimed at encouraging energy efficiency are likely to affect energy use and GHG emissions both inside and outside the sectors covered by the EU ETS. This would happen for example under a programme designed to increase commercial boilers' efficiency – some of these boilers will be used by industries participating in the EU ETS, some will be in firms not subject to the ETS.

Also policies that address energy efficiency in households or in buildings affect the EU ETS indirectly. On the one hand, they create savings in electricity, which is generated by firms covered by the EU ETS, and they also create savings in heating fuels, which are outside the system.

If the policies promoting energy savings within the EU ETS cap are cost-effective, they will result in a lower allowance price under the ETS. They will therefore lower the overall cost of reaching the cap. However, they will not result in additional mitigation, as all the reductions achieved through energy efficiency measures are already covered by the cap.

This interaction is positive in terms of short-term cost-effectiveness. But if the design of the ETS did not take into account these reductions from energy efficiency policies, then the incentives for abatement in other parts of the ETS system will be undermined.11 Therefore, a good balance between the ETS and the energy efficiency policies is needed to maintain an appropriate distribution of mitigation effort across the economy.

Based on a survey with European power generators and power technology providers, Rogge et al investigate the relevance of European climate policy instruments and other policies targeting the power sector for business decisions of such private actors.12

Several of their findings are relevant for reaching conclusions on how climate – and other – policies interact. Firstly, they find that for business actors, the short-term price signal given by the EU ETS is strongly interrelated with the long-term signal given by the European GHG reduction target. They conclude that policy makers need to design the future policy mix in a coordinated way, e.g. by raising the stringency of different elements in a synchronized manner.
Secondly, they find that currently, the signal provided by European climate policy instruments – namely the EU ETS and the long term emissions target – is weaker than the impact of technology-specific policies, such as feed-in tariffs (FITs) for renewable energy. The authors ascribe this finding to the still low carbon price generated by the ETS and to its long-term uncertainty.

These findings relativize the traditional view that a carbon price signal is the best possible way to encourage emission reductions, in the sense that in practice, such price signal needs to be sufficiently strong and certain to have the desired effect. As long as such certainty is not in place, which is the case of the current EU ETS, complementary policies that target energy supply more directly will be needed.

4.2. In the short term, renewable energy polices increase the cost of complying with the EU ETS

Economists frequently hold the opposing view. If there is an emissions cap such as under the EU ETS, the additional renewable energy policies do not reduce emissions further. As these policies are aimed at supporting technologies that are frequently not yet competitive (e.g. small-scale hydro, small-scale wind or photovoltaic power), they actually shift the abatement towards more expensive technologies. Without the renewable energy policies, the carbon market would merely seek the cheapest mitigation opportunities and capture them first, before moving towards renewables.13

Some studies even note that, because the renewable energy policies generate emission reductions themselves, they would lead to a lower permit price under the ETS. This effect would in turn give a relative advantage to more emissions-intensive power generators. For example, with a lower carbon price, coal-based generators would gain some relative advantage over the less carbon-emitting gas generators – compared to a situation without the targeted renewable energy support.14

So, in the short term, it seems that renewable energy policies actually increase the cost of emission reductions and do not generate additional reductions. Why should they be implemented then?

4.3. In the long term, renewable energy policies decrease the cost of emission reductions

The most important justification for dedicated renewable energy support policies is long-term cost effectiveness.15 New renewable energy technologies are expensive. But cost reductions can only be achieved if they are deployed early so that learning can take place. The large-scale deployment of renewables that is needed to achieve climate stabilization in the long term, thus becomes cheaper if these technologies are supported early on.

Philibert also notes that the advantage for coal generators provided by the renewable energy policies will only be minor. It will thus not lead to a locking-in of more polluting technologies. Furthermore, he proposes adding a price floor to the ETS system or a tightening of the cap as potential solutions for this problem. This goes to show that several options exist to minimise potential negative impacts from policy interactions.

Further information about how climate policies interact in practice in Europe can be found in the Knowledge Package Interactions between Climate Policies: Opportunities and Pitfalls.