Climate mitigation is a popular strategy to address climate change by reducing greenhouse gas emissions. Various options are available for both mitigation policy and technology measures, providing enough economic potential to offset the projected emissions growth. It is crucial for policymakers to be aware of possible side effects, such as co-benefits and interlinkages to adaptation, to pursue a cost-effective implementation pathway.

1.1 A strategy to address climate change

Future effects of climate change will vary depending on several factors, such as political actions and social development. Climate change policies identified three possible strategies to address climate change impacts: climate mitigation, adaptation, and climate engineering1. Figure 1 shows where the different strategies set in within the climate change context. Whereas climate change mitigation tackles the full range of anthropogenic activities to reduce sources or enhance the sinks of greenhouse gases (GHG), climate adaptation manages the adverse impacts caused by climate change. If neither mitigation nor adaptation are sufficiently effective to control climate change damages, geoengineering techniques, are used or could be used to decrease the GHG concentration in the atmosphere.

Climate change can be addressed in multiple ways
The three policy options: Climate Mitigation, Adaptation and Engineering in the climate change context 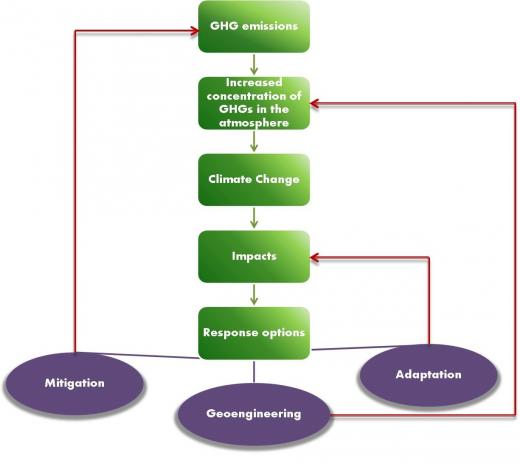 Figure 1: While mitigation addresses the emissions of GHG in the first place, geoengineering sets in later at the increased concentration of GHGs in the atmosphere. Adaptation, however, addresses the impacts after climate change having occurred.
Source: Tom Tietenberg and Lynne Lewis, Environmental & Natural Resource Economics, (Boston, [Mass.]: Pearson, 2015)

The number of climate change mitigation policies has grown over the last decades, however, GHG emissions increased on average by 2.2 % per year from 2000 to 2010 compared to 1.3 % per year from 1970 to 20002. Additional measures to reduce emissions beyond those in place today are needed in order to prevent a persistent increase of GHG emissions caused by consumption and population growth. The Intergovernmental Panel on Climate Change (IPCC) - baseline scenarios for the year 2100 predict increases in the global mean surface temperature from 3.7°C to 4.8°C compared to pre-industrial levels, if mitigation efforts remain constant2. Regarding the economic potential for the mitigation of global GHG, the IPCC concludes in its Fourth Assessment Report that the projected growth of emissions can be at least offset3.

All Parties of the United Nations Framework Convention on Climate Change (UNFCCC) are required to mitigate climate change emissions based on their financial and technological capacities. In 2007, the EU and its member states announced an emission reduction target of 20% for 2020 compared to the level of 1990, but increased this target to 30% in 2009 on the condition that other developed countries commit themselves to comparable emission reductions. Furthermore, developing countries would also have had to contribute to reductions according to their responsibilities and respective capabilities4. With that respect the Conference of the Parties invited all Parties to communicate their intended nationally determined contributions (INDCs) well in advance of COP21. By the 6th of March 2015, the EU and its member states announced a binding emission reduction target of at least 40% for 2030 compared to the level of 19905. By 1 October 2015, 147 Parties submitted 119 INDCs in response to the UNFCCC’s invitation, representing 75 % of Parties and 86 % of global emissions in 20106.

But how can we meet these mitigation targets? What are the options available and how can we ensure their implementation?

Mitigation has the goal to slow down the temperature rise by using strategies designed to reduce anthropogenic emissions of GHGs. Mitigation may also be achieved by increasing the capacity of carbon sinks, for example through reforestation. One of the most significant mitigation strategies, though, tried to curb the emissions through reducing the use of fossil-fuels energy (as this is one of the main sources of CO2 emissions). Emissions can be reduced either by using less energy or by using alternative green energy sources, such as wind, photovoltaics or hydro, that produce less or no carbon dioxide2.

In each major industrial sector (energy supply, transport, buildings, industry, agriculture, forestry, waste) there are specific mitigation options available, and in order to achieve these, policy measures for technology implementation have been identified by the IPCC. These are listed below3:

For example, in the energy supply sector, the reduction of fossil fuel subsidies, taxes or carbon charges on fossil fuels (=policies) would lead to switching fuel from coal to gas (=mitigation technology). In the waste sector, financial incentives for improved waste and wastewater management, renewable energy incentives or obligations and waste management regulations (=policies) may cause waste incineration with energy recovery, composting of organic waste, controlled wastewater treatment and recycling and waste minimization (=mitigation technology). In the buildings sector, efficient lighting and daylighting and more efficient electrical appliances and heating and cooling devices (=mitigation technology) can be ensured through appliance standards and labelling, as well as through building codes and certification (=policies)3. For a detailed description of options available in the agriculture sector, look at the Knowledge Package: Mitigation options for agriculture in the EU. 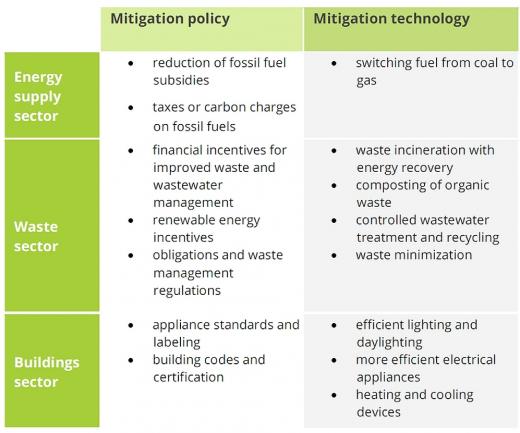 It is clear, however, that one single technology cannot compensate for the entire economic potential to reduce GHG emissions in a sector, but that a combined implementation yields the best outcome. Figure 2 displays the economic potential by sector and region estimated by bottom-up studies for the year 2030. ("Top-down" and "bottom-up" approaches are explained in the Knowledge Package: International Climate Policy Architectures – Top-Down and Bottom-Up) Non-OECD/EIT countries make up the largest share in almost all sectors, excluding the transport sector where the mitigation potential is shown for the world in total only due to the inclusion of international aviation. With a lead of more than one gigatonne CO2 equivalent per year (GtCO2-eq/yr) the buildings sector provides the highest mitigation potential. For a closer description of the building sector, please have a look at the Knowledge Package: Household Contribution to Buildings’ Carbon Footprint. However, if compared to predicted GHG emissions, these potential can offset GHG emissions or even reduce them below today’s levels3.

Mitigation Potential across sectors and regions
Estimated mitigation potential by sector and region for 2030. The potentials do not include non-technical options such as lifestyle changes.

Figure 2: The potential for mitigation differs across sectors and across regions. While it is in general higher for Non-OECD/EIT countries than for OECD or EIT countries, the highest potential is located in the buildings sector.
Source: International Panel on Climate Change, Climate change 2007: synthesis report. Fourth assessment report of the Intergovernmental Panel on Climate Change, (Geneva: IPCC, 2007), p.59. Online available at: https://www.ipcc.ch/pdf/assessment-report/ar4/syr/ar4_syr.pdf

2. The power of co-benefits

Apart from reducing GHG emissions, mitigation efforts can have positive side effects due to the intersection with other societal goals, called co-benefits. In practice, mitigation efforts in one sector can have beneficial effects in other sectors implying that it is more cost-effective if strategies are coordinated cross-sectoral. Many of the co-benefits relate to the improvement of local air quality and the associated health benefits, as well as crop quality. Regarding the problems that arise with the provision of public goods and especially in the case of global public goods, that is mitigation, co-benefits can offset some share of GHG mitigation costs in the short term and hence provide incentives to participate in a cooperation to mitigate climate change. According to the OECD, the benefits of climate change mitigation policies in the coming decades would be essentially the co-benefits since the direct benefits of mitigation policies are expected to occur in the longer run7.

Figure 3 shows the possible reduction in air pollutant emissions induced by a 25% or 50% cut in GHG emissions for different regions and three different types of emissions: primary particle emissions, NOx emissions and SO2 emissions.  The considerable size of the co-benefits is clearly visible and illustrated below. 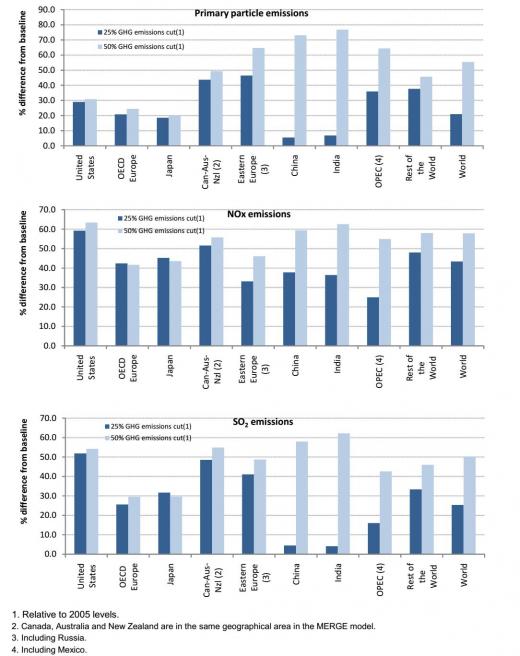 3. Why consider adaptation when deciding on mitigation?

No mitigation effort operated today, no matter how stringent, will prevent climate change to occur within the next few decades due to the time lag of the effects. Consequently, it is unavoidable to implement adaptation in parallel. To stop mitigation efforts is not feasible, since this would only increase economic and social costs for adaptation at a later stage, if the latter could still be considered an option at that time. With adaptation being a complementary policy strategy to cope with climate change impacts, decision-makers are required to consider possible interactions with mitigation. This purpose is twofold: on one hand, creating synergies between adaptation and mitigation can increase the cost-effectiveness of actions and make them more attractive to stakeholders, including potential funding agencies; on the other hand, the implementation of a poorly coordinated policy mix may lead to undesirable outcomes8.

The analysis of the inter-relationships between adaptation and mitigation reveal techniques to support the effective application of adaptation and mitigation actions together. That is the case because elements of adaptive and mitigative capacities, such as the availability of technological options or the access to economic resources, social capital and human capital, largely overlap9. The IPCC (2007)8 claims that opportunities for synergies are greater in the agriculture, forestry, buildings and urban infrastructure sectors, but are limited in others, like coastal systems, energy, health. Moreover, four different types of interaction are identified:

Figure 4 shows the different types of interactions with associated examples. 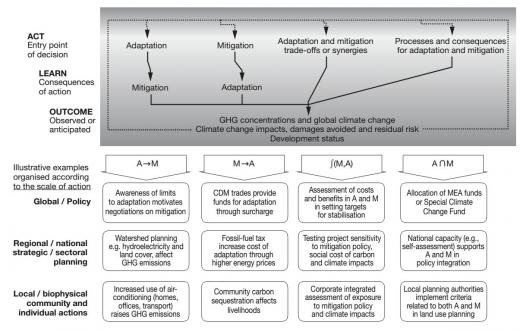 The conclusion of this article is that mitigation is a necessary strategy to combat climate change, however, one has to be careful when deciding on the policy mix. Literature shows that there are many options available to reduce GHG emissions and provides also an overview of existing policy instruments to put the options into practice. Moreover, estimates from bottom-up studies argue that there is enough mitigation potential to offset GHG emissions or even reduce them below today’s levels. Considering the different sectors, as well as other climate change policies, such as adaptation, trade-offs and synergies must be taken into account to pursue a cost-effective implementation pathway. The article presents the intersections with societal goals and how these can result in co-benefits that offer an incentive for mitigating climate change.