The opposition of few countries to market mechanisms coupled with limitations for involving developing countries, parties under the United Nations Framework Convention on Climate Change are considering measures known as non-market-based approaches, like policies and regulations. This knowledge package shows the involvement of definition of non-market-based approach, ensuring environmental integrity and ensuring sustainable development.

The climate change regime under the Kyoto Protocol relied significantly on market mechanisms such as the Emissions Trading Scheme (ETS), Clean Development Mechanism (CDM) and Joint Implementation (JI) as a way to make achieving emission reductions more cost-effective. In addition, the CDM had the goal of involving developing countries in mitigation while contributing to their sustainable development. In the past few years, the problems faced by these market mechanisms, such as the fall in the price of carbon, have encouraged parties under the UNFCCC to explore options beyond them. The concept of non-market based approaches emerged in the UNFCCC negotiations as a proposal for dealing with climate change by countries like Bolivia and Venezuela who severely opposed to the use of market mechanisms. These countries claimed that market mechanisms essentially promote the right to pollute and commodify the climate.

While there is a general consensus amongst UNFCCC parties that non-market based approaches (NMAs) will be an important element of the post 2020 agreement that is to be agreed upon at the Conference of Parties (COP) in Paris 2015, it is not yet clear what exactly constitutes such a NMA. In this knowledge package we discuss the history and current status of discussions on NMAs under the UNFCCC. For more information on market mechanisms, please refer to "New market mechanisms: Status of discussions under the UNFCCC" .

2. Emergence of the concept NMAs

In the Bali Action Plan (2007) parties under the UNFCCC agreed to enhance mitigation options using various approaches including those of markets. Following this agreement, non-market approaches surfaced as an important element of discussion for enhanced mitigation action during COP 16 in Cancun 2010. The Cancun Agreement1 requested parties "to consider the establishment, at the seventeenth session of the COP, of one or more non-market-based mechanisms to enhance the cost effectiveness of, and to promote, mitigation action". Due to the failure of parties to finalize a post 2012 agreement under the UN Ad Hoc Working Group on Long-Term Cooperative Action (AWG-LCA), the work on non-market mechanisms was referred to the Subsidiary Body for Scientific and Technological Advice (SBSTA) at the COP 18 held in Doha. The SBSTA asked parties to submit their views "on experience and good practice relevant to the design and operation of non-market-based approaches"2  to the UNFCCC Secretariat in September 2014. Submissions by a few parties have been received on this topic.

At COP 19 in Warsaw (2013), parties have accepted that for implementation of NMAs to be successful a necessary precondition is international coordination, cooperation and contribution with the intention of safeguarding sustainable development3. Negotiating parties have agreed that certain policies and measures – such as those that promote the development and transference of renewable energy technologies, energy efficiency, or phasing out of substances such as HFCs that cause harm to the environment, as well as initiatives promoting mitigation and adaptation – can be considered to be existing NMAs4.

In the above context, nationally appropriate mitigation actions (NAMAs) may also represent NMAs although they can act as a channel for market-based mechanisms such as emissions trading or work as an amalgamation of both market and non-market based approaches. Most parties view NMAs to be domestic policies5. There are also ongoing discussions on the international cooperation aspect of NMAs. For example, international cooperation may be in the form of provision of capacity building support and financial assistance. Some parties have also viewed reducing emissions from deforestation and forest degradation (REDD+) to be a mechanism of NMA. REDD+ is broader than REDD and includes the role of conservation, sustainable management of forests and enhancement of forest carbon stocks.

However, parties' views are widely divergent with regard to whether REDD+ should have only a NMA component or whether it should have a market-based track as well. The figure below represents the current understanding and discussions on what could potentially be considered to be NMAs as assessed by the UNFCCC. The assessment was based on the submissions from parties, relevant SBSTA discussions, national communications as well as related discussions.

NMAs
Examples of potential NMAs being discussed at the UNFCCC 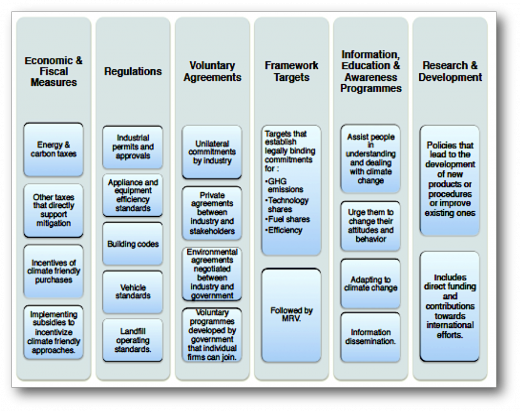 EU - A submission6 to the UNFCCC by the EU in 2014 indicates that the EU considers cost effective mitigation actions to be the most important component on NMAs. They also stress on the importance of co-benefits such that they should not be ignored although the main focus of NMAs should be on mitigation of greenhouse gas (GHG) emissions.

Environmental Integrity Group’s (EIG) - The EIG's7 views are well allied with those of the EU as they also emphasize cost effective mitigation measures. They further elaborate that the focus on NMAs should have an international dimension for coordination in order to implement it at lower levels, regional, subnational or national. Like the EU, they also warn against duplication of discussions or instruments under the UNFCCC or other institutions.

Least Developed Countries (LDCs) – The LDCs8 reason that the importance of NMAs is largely because of the fact that not all developing countries had access to market mechanisms such as the Clean Development mechanism (CDM) and hence the dependence on market mechanisms alone might not be sufficient for emission reductions.

Bolivia and Saudi Arabia - Countries like Bolivia and Saudi Arabia assert that the fundamental objective of NMAs should be GHG reductions but should be based on historical responsibility of emissions. They state that it is the responsibility of developed countries to take the lead in emission reductions as well as assist developing countries through transfer of financial and technical support and the actions of developing countries would be contingent on this support.

These submissions reveal the divergence of views among parties regarding what constitutes NMAs and how to implement them.

At a workshop discussing NMAs in Bonn (2013)9 parties agreed that NMAs were better suited for cases where emission reductions were not easy to quantify or carbon leakage could be a possible issue or where the carbon price was too low. Other options that can be considered for the use of NMAs were in enterprises where the investment decisions were not driven only by mitigation of carbon emissions but also other factors. The 41st SBSTA meeting held in 2014 in Lima did not succeed in reaching an agreement, so that work on this topic is still ongoing. The key challenge around the NMA discussions is that there is still no proper definition of what they are. Current discussions on NMAs revolve around existing approaches. Therefore, the additional value of implementing these approaches under the new umbrella of NMAs is an open issue with an ongoing assessment procedure.