Market-based instruments are indirect regulatory instruments, which influence actors' behaviour by changing their economic incentive structure. Costs from environmental externalities, such as greenhouse gas (GHG) emissions, are usually not reflected in consumption or investment decisions but are nonetheless imposed on third parties. Therefore, these types of policies work by reflecting the environmental impact of a certain action by attaching a cost to it, to signal and provide an incentive to the polluter to reduce this impact.

Figure 1 shows the breadth of market-based instruments used in the EU. The most important instrument types here are environmental taxes and emissions trading. 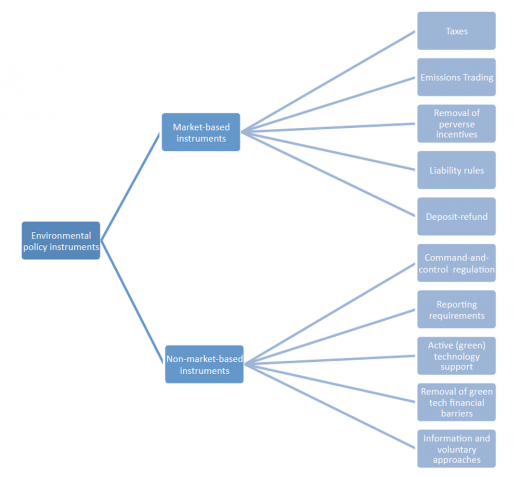 2. Taxes: getting the price right is essential

The idea of environmental taxation was first introduced by Arthur Cecil Pigou, which is why these taxes are sometimes also referred to as Pigouvian taxes. Environmental taxes add directly to the price of a certain good or service, which ideally should reflect the environmental externalities caused by production and/or consumption of this good or service. The rise in costs is usually passed through to the end consumer. In theory, the consumer reacts with a reduction of demand, as the price increases. However, consumer reactions are hard to predict and depend on availability of substitutes and perceptibility of the price signal. As a tax fixes a price and thereby indirectly influences behaviour, it is therefore also crucial to set the price at the right level. For these reasons environmental taxes bear a certain degree of uncertainty regarding their environmental effectiveness.

Furthermore, environmental taxes change the relative values of input factors in the economy. When energy prices rise, this means that relatively labour becomes cheaper. If revenues are additionally spent on tax reductions in other areas, such as labour, this effect even multiplies. The tax therefore has the potential to produce a so called "double dividend", i.e. tackling environmental problems and reduce taxation in other areas. However, it is a fundamental characteristic of an effective environmental tax that its tax base will erode. Moreover, environmental taxes tend to have negative distributional effects, since lower income households are generally more affected and might also be more limited in the substitution options available to them2.

The most relevant environmental taxes in the EU are excise duties on energy products (used for stationary purposes and for transport) and vehicle taxation.

3. Taxes: Tricky to use as a common EU policy due to consensus requirements

The main drawback to use taxes as a climate policy instrument on the European level is the need for consensus between Member States regarding their introduction, as well as the detailed policy design e.g. tax rates and tax bases. As this consensus is very hard to achieve, environmental taxation so far has proven to be a policy instrument with low practical feasibility at the European level.

The EU determines minimum tax rates for energy products used for heating, as a fuel or as electricity in the Energy Taxation Directive3. However, many Member States apply exemptions or reductions. Moreover, these minimum tax rates are not based on the carbon content of the fuels but mainly on weight or volume4. However, some Member States apply an explicit carbon tax on top of the regular energy excise duties. In 2012, energy taxes accounted for 75% of environmental tax revenues in the EU5.

Vehicle taxes include registration taxes, ownership taxes and road use charges in form of vignettes or distance-based toll systems. In 2012, transport taxes accounted for 21% of environmental tax revenues in the EU5.

Cap and trade systems, like taxes, generate economic incentives to change the behaviour of societal actors and reduce pollution. But instead of introducing a fixed price which is added on the price of a certain good or service, the starting point in a cap and trade system is a limit on the physical emission quantity (cap) of a harmful substance, introduced by a regulatory authority, which issues emission allowances according to the maximum limit it has defined. This is either done by grandfathering (free allocation according to certain criteria, such as past pollution) or auctioning, which generates revenue for the governments. The emission allowances can be traded on a market and polluters can buy and sell them according to their needs, with the allowance price determined by supply and demand. Polluters carry out mitigation actions until it is cheaper to buy an allowance on the market than to mitigate a further emission unit. As a result, those polluters with the cheapest mitigation options will reduce the most. This theoretically guarantees the most cost-effective mitigation pathway for society2.

Cap and trade systems are in theory more dependable than taxes since emissions are capped. However, in real applications market design can become very complex. Furthermore, the demand for allowances also depends on the economic situation. In a recession economic activity will decrease and thereby emissions, which will drive down allowance prices. The low allowance price will not serve as an incentive to invest in low carbon technologies and which can create a lock-in effect, as no further action is required to achieve the emission cap. This can make future emission reductions more expensive, threatening the theoretical cost-effectiveness of an emissions trading system (ETS).

The EU Emissions Trading System (EU ETS) is an example for an implemented cap and trade system. It was first introduced in 2005 and revised in 20096. It covers all heavy energy-using installations in power generation and manufacturing industry within the EU Member States, Norway, Iceland and Liechtenstein, as well as aviation. The EU ETS covers around 45% of greenhouse gas emissions in the EU7. The EU ETS target is a reduction of 21% of emissions compared to 2005 levels until 2020 and 80-90% until 2050 compared to 1990. The EU ETS is the first and largest emissions trading system in the world8.

This instrument refers to the removal of subsidies for environmentally harmful activities and products, such as subsidies for the extraction or production of fossil fuels, exemptions from energy taxes, or fossil fuel subsidies to keep the price level low. Furthermore, this also includes the removal of further incentives rewarding harmful activities, such as the abolition of liability exemptions1.

Regarding the extent of these so called perverse incentives, the environmental impact of their abolishment can be potentially large, as the following example shows: In 2012, total support provided by EU Member States to coal power generation (hard coal and lignite) summed up to some EUR 10 billion (not including historic support), improving the profitability of the investment, mainly in the form of investment grants, exemptions from fuel taxes and support to decommissioning and waste disposal. Meanwhile total external costs of coal power generation are estimated at EUR 86 billion9.

Furthermore, there are liability instruments which "impel concerned parties to internalize external costs through the threat of consequential costs"1. Deposit refund systems charge consumers an upfront payment for improper waste disposal. The refund is a reward for returning the waste to the right collection point.